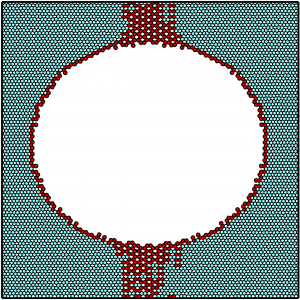 A numerical code was developed to implement the methodology in the case of 2D-graphene systems modeled with REBO. This code was used to study the failure behavior of graphene-like system with flaws (cracks, holes) in order to investigate of the long-standing issue of failure initiation in a flawed material: for graphene sheets much larger than 3.5 nm, one can distinguish between energy-driven failure (fracture failure) and stress-driven failure (yield failure). Simulations have been performed on flawed graphene sheets of 10 to 20 nm to investigate the detailed transition from fracture to yield failure, which strongly benefited from the methodology established in the postdoc project. The results obtained were particularly interesting since it appeared that only one of the many initiation theories (Leguillon’s criterion) could capture the failure behavior predicted for these systems. This finding raises interesting questions about the physics of failure initiation and is the focus of another Labex project (PhD of Sabri Souguir). 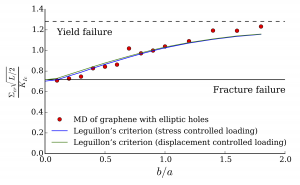 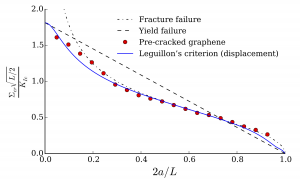