Since several years, the study of aerated cementitious materials has become an active field of research. The control of the material microstructure, i.e. pore size and pore connectivity for example, is a major issue for applications. The microstructure is known to depend not only on the aeration method but also on the evolution of the aerated cement paste before hardening (see picture). The control of both the generation process and the further evolution of the system is therefore of primary interest in the development of optimized foamed cements. 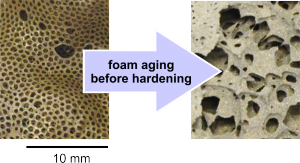 Before cement hardening, air bubbles act to destabilize the material through three distinct mechanisms: (1) the gravity driven flow of the paste through the rising bubbles leads to inhomogeneity in the distribution of air within the sample, (2) gas exchange (ripening) is driven by the difference in capillary pressure of the bubbles, producing intermittent bubble rearrangements and a global increase of the average bubble size Rb as a function of time, and (3) foam films breakage induces the coarsening of the bubble assembly through coalescence events. In the control of those destabilizing mechanisms, a relevant strategy is to take advantage of yield stress τy) properties of pastes [1,2]: basically, drainage stops as τy ~ ρgr, where ρ is the density of the paste and r is the typical size of interstices between the bubbles, and the ripening process reduces strongly as τy ~ γ/Rb, where γ is the surface tension of the liquid/air interface. As the cement paste naturally possesses a yield stress, it is a major issue to control τy as surfactants are added to the paste and adsorb at the surface of the cement particles.

In this work, we first consider the interaction of surfactants with a cement paste. We determine the effect of surfactant addition on the yield stress of the cement paste. It is shown that the yield stress strongly depends on both the type of surfactant and the surfactant concentration. This behavior is understood in considering the measured amounts of surfactant adsorbed at the surface of the cement grains. This first step allows us to identify the most appropriate surfactants solution to be used in the cement foam elaboration process. For the next step, we use the method developed at NAVIER [3] for elaborating foamy cement pastes with a controlled initial microstructure. The study of the aging of those foams will allow for the optimal stability conditions to be clearly identified. Functional properties of hardened samples will be determined.